We are happy to announce an opportunity to use two novel integral field units (IFUs) on a shared risk/shared use basis in observing semester 2014B. These IFUs, called "HexPak" and "GradPak", were designed and built (PI: Matt Bershady) at the University of Wisconsin's Washburn Astronomical Laboratories. Unlike typical IFUs, these new additions to WIYN's instrument suite have different sized fibers in the same IFU bundle: HexPak has a high spatial resolution core of 0.94 arcsec fibers subtending 6 arcsec in diameter, surrounded by a hexagonal array of 2.9 arcsec fibers subtending a 40.9 arcsec diameter; GradPak is a 39 X 55 arcsec rectangular array with rows of fibers varying from 1.9 arcsec to 5.6 arcsec. These new designs seek to resolve the competing needs of large grasp per fiber (telescope collecting area multiplied by the solid angle subtended by the fiber) to obtain sufficient S/N on low surface brightness features vs. smaller fibers to achieve better spatial resolution. HexPak was designed with face-on and early type galaxies in mind, with the smaller fibers to be placed on the higher surface brightness galaxy core. GradPak is ideal for edge-on systems, with the smaller fibers placed on or near the midplane. However, the use of the new IFUs is in no way restricted to these design goals; users should feel free to employ either fiber head to optimal effect for observing any type of extended object. You can read more about the new IFUs in Wood et al. 2012, Proceedings of the SPIE, Volume 8446, id. 84462W-84462W-10. See the figure below for a quick visual summary. 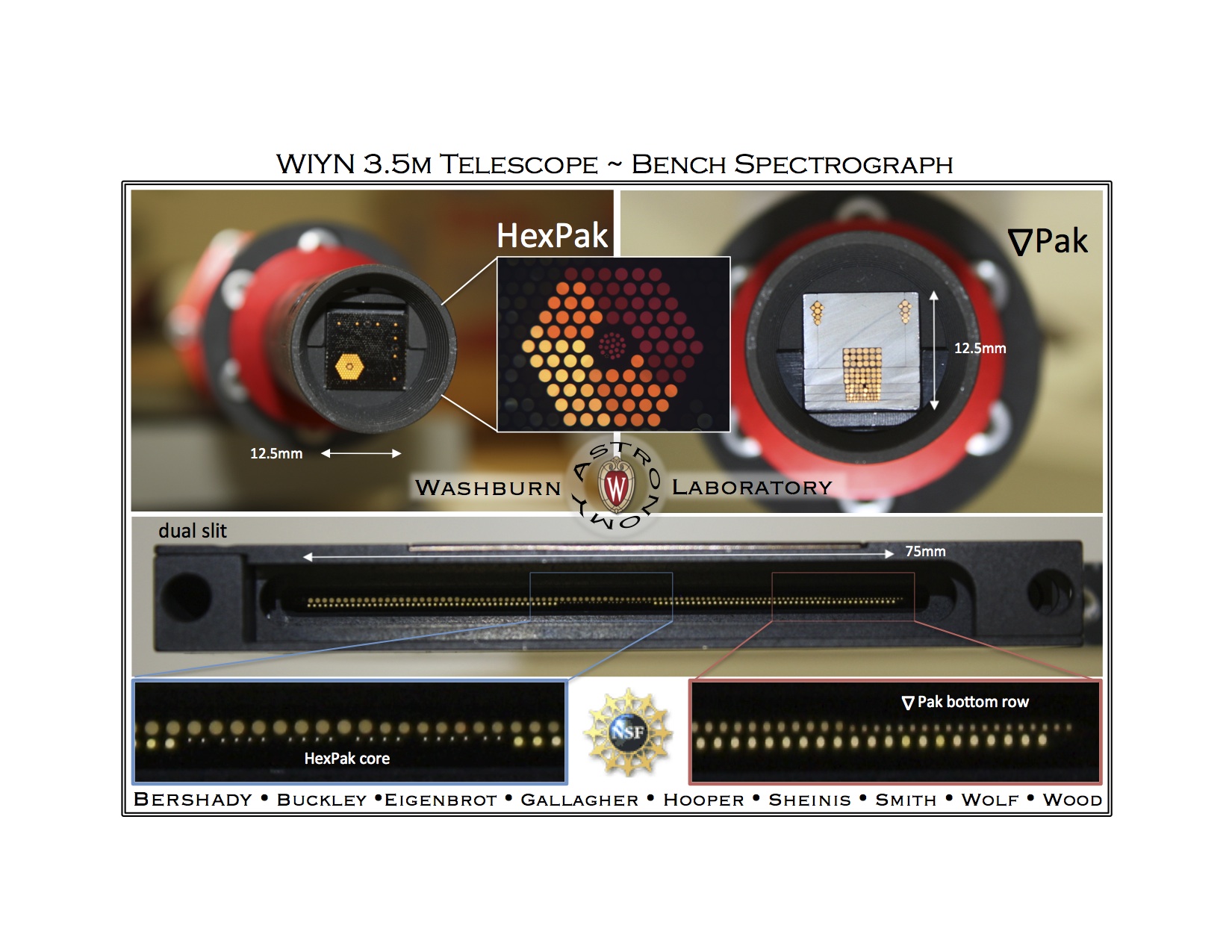 SparsePak will continue to be offered as a WIYN facility instrument. The new IFUs will be mounted and will operate in a manner very similar to that of SparsePak.

The new IFUs were delivered to WIYN late last fall. Some limited on-sky observations were done, enough for basic proof of life; however, more thorough testing and characterization won’t be possible until after the IAS instrument package, which supports all of the IFUs, is re-mounted on WIYN later in this current (2014A) semester. In the interest of making these new instruments available to the WIYN community as quickly as possible, we are offering access to what will still be a PI-class instrument in the upcoming 2014B semester. Potential observers need to be aware of the relatively modest but non-zero risks involved, and proposers are strongly urged to craft an observing plan which could use SparsePak as a backup in the event of unforeseen problems.

As the IFUs are still PI instruments, proposers must follow the procedure outlined on the Hexpak and Gradpak web pages. In short, it involves: 1) contacting the instrument PI in advance of submitting the proposal to discuss the technical requirements of the program and any help anticipated from the instrument team for observing planning and data reduction; 2) electronically sending short letters from the proposer and instrument PI to the appropriate observatory director; 3) and finally, submitting the proposal to the observer's normal TAC by the regular deadline.